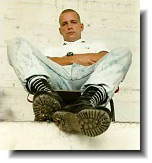 I’ve got to admit that the word „skinhead“ has got negative associations, particularly in the USA and Germany. There are many people for whom skinheads are synonymous with right wing thugs and racism. Things aren’t always quite so simple and clear cut though.

Skinheads first appeared in Britain in at the end of the sixties. The movement had its origins in the working class and most skins of the time were very much aware of their „working class roots“. Putting the boot in and going down the pub were the two things this first generation of skins liked doing best. They weren’t interested in right wing ideas or indeed in any sort of politics at all. Quite the opposite: they got on well with immigrant kids from Jamaica and the Caribbean: they partied together and danced together to the Ska and Reggae music which the black community had brought to Britain.

Gradually skinheads developed into a rebellious youth movement which by the seventies was portrayed by the media as a violent subculture. The skinhead crop, flight jackets and big boots all seemed to suggest the image of „the violent thug“ in the eyes of the public. This aggressive image was then appropriated by fascist groups for their own ends. Though some skins allowed themselves to be manipulated by right wing parties and organisations, there were others who just „wore the gear“ and thereby - quite literally - gave the skinhead cult „a good kicking“.

Fascists have unfortunately taken as their trademark the image of „boots, beer, bonehead crop and bomber jacket“. The fact that skinheads originally had nothing whatsoever to do with extreme right wing politics seems to have been forgotten. The statement „all skinheads are nazis“ is an invention of the media. It’s difficult to get across the fact that young fascists who march through the streets with shaven heads and waving nationalist flags have nothing to do with traditional skinheads. They may look like skinheads, but hardly any of these characters will know anything about the origins of the skinhead cult in Great Britain. Pathetic! Incidentally: in skinhead circles it’s frowned on to go around looking like the guy in this picture. Real skinheads don’t shave their heads completely, but crop their hair every three or four days with a cheap pair of clippers. 90 seconds and it’s done... As opposed to the ages it takes to shave your head with a wet razor.

A group of skinheads wanted to do something to challenge „the right wing reputation in the scene“. They demonstrated against racism and organised anti-fascist concerts. „S.H.A.R.P“ made a name for themselves as an international, anti-fascist group (Skinheads Against Racial Prejudice), but you hardly hear anything about them these days. It’s important to note, however: Just because somebody hasn’t got a SHARP patch on their bomber jacket does not automatically mean they are Nazi skins! The same also applies incidentally to skins who wear those dreaded white bootlaces.

The information centre for racism research at the University of Marburg has produced an article documenting the history of the skinhead movement:

»When the subject of fascist thugs comes up, it’s not just in the media that skinheads and Nazis are portrayed as if they were one and the same thing. This is tantamount to a wholesale slur on one of the oldest youth subcultures and is just plain wrong. The skinhead movement had its roots in the UK in the late sixties when black ska and reggae bands were the preferred music of both white British working class kids and young immigrants. Many skins at that time were influenced by a sort of „working class consciousness“ or were just not into politics. Being a skinhead meant being a member of a rebellious youth movement in which racism featured neither more or less than in any other group in society. Towards the end of the seventies the media discovered a new hate figure: the „skinhead“ whose violent behaviour posed a threat to society. It did not take long before organised fascist groups attempted to recruit skinheads for their own ends. Within a section of the skinhead movement, these attempts were indeed successful, giving rise to so called „boneheads“, who openly identified themselves with extreme right wing views. They also appropriated the outward appearance of skinheads – their clothing for example – without acknowledging the anti-racist roots or background of the skinhead movement. However, to this day it is boneheads who shape and distort the public perception of the skinhead movement. Since the end of the eighties many skinheads have taken a stand against this image of „Nazis with short hair“. The SHARP movement („Skinheads against racial prejudice“) was created to draw a clear dividing line between genuine skinheads and those who are in fact Nazis but just call themselves skinheads without actually having anything whatsoever in common with skinheads. At the end of the day it would make no kind of sense to be enthusiastic about black music and at the same time condemn musicians on account of their skin colour and culture. It’s a fact that true skinheads have nothing in common with racists and fascists.« This means that amongst skinheads there are just as many different viewpoints with regards to politics and other issues as there are in any other subculture or group in society. It does not mean, however, that anybody who does not wear a SHARP or „Anti Nazi“ patch on their jacket is automatically a Nazi. The slur that sees all skinheads as fascist fellow travellers only serves as a smoke screen, distracting from the real racist criminals in Germany who continue their activities undetected, because their appearance is less conspicuous.

Source: Information centre for racism research at the University of Marburg

Kadik wrote the following entry in the guest book:

»Hi. My name’s Kadik, I’m 16, was born in Lüneburg and my parents come from Sri Lanka. To be honest with you, racism used not to be a matter of any great interest to me. Sure... I was on the receiving end of a bit of micky taking at school, but it was not until a lad who used to be my best mate became a Nazi and my class reacted in a way which showed they were quite laid back about the whole business, that I really became aware of racism as an issue. Their indifference shocked me, as did the fact that this lad and his mate (also a Nazi) would even grin and snigger in class when any issue connected with extreme right wing views was mentioned in class. When they played „Landser“ CDs at parties (translator’s note: a German Nazi rock group), that did not seem to be a problem, likewise they were allowed to listen to right wing rock groups at school like „Störkraft“ and go around wearing t-shirts with the words „Divison 88“ emblazoned on the front. Some of my classmates are now of the view that all Turks and Russians are shite, and that the only thing Blacks do is produce drugs and sell them here. Also I’ve been told that it’s the state that has financed our family Mercedes or that we got preferential treatment to enable us to buy a house. I really got mad when this lad told me that unemployment would go down if all foreigners were deported and that Blacks were milking the „white world“ dry. I didn’t say anything, but just thought to myself that you should do a bit more research before you open your mouth. Imagine then how ashamed I felt of myself when I stumbled across this site whilst surfing the net to find out more about these brainless Nazis and their history. Having to live with other people’s prejudices really winds me up…but then I realised that I have got prejudices of my own towards certain people. I’d always thought that skinheads were just a load of thick Nazis. I now realise that Nazis have just copied the skinhead look. I think you and I face the same problem: when people see us on the street, they get the wrong idea about us. That’s why I would like to help you in your attempts to educate people.«